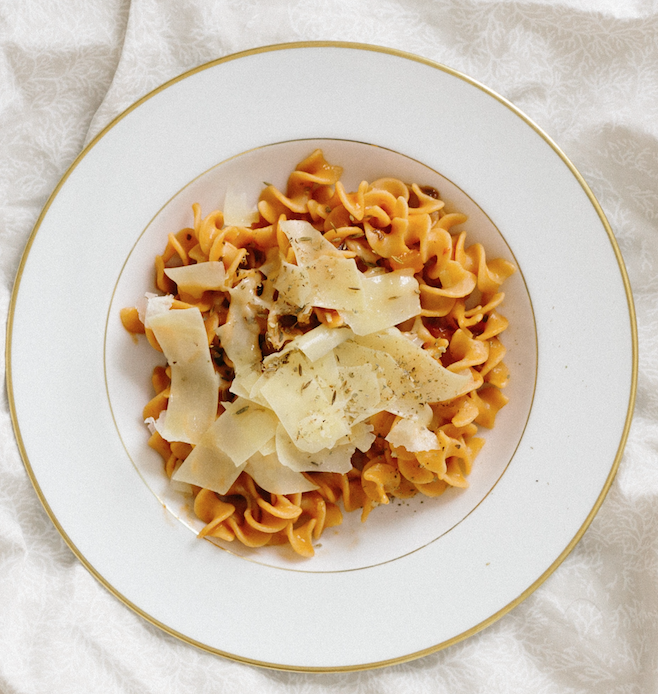 Who doesn't love a good pumpkin recipe? I know I do!! (hand-raised).  Well this Pumpkin "Pasta" is sure to perk your interest AND it's a great savory dairy and gluten free alternative to all the sweet pumpkin treats this Fall. Your tastebuds will thank you!

2 cups GF vegetable broth (I like Imagine or Pacific brands)

1Bring large pot of heavily salted water to a boil.

2Cook penne according to directions on the package or sauté veggie noodles in oil or bake for 15 minutes at 350 in oven.

3Reserve 1 cup of the starchy pasta water for pasta

5Rinse with hot water and set aside

6While the pasta water is boiling, heat the olive oil in a large skillet over medium-high heat.

7Add onion and cook until tender, about 5 minutes.

8Add the garlic and red pepper flakes (if using) and cook for another 30 seconds.

9Add the kale and cook, stirring, until tender, about 3 minutes.

11Stir until heated through, about 5 minutes.

12Add the drained pasta to the sauce, stir

13Add some of the reserved pasta water to thin the sauce.

14Taste and adjust seasoning with more salt or pepper if needed.

15Cook until everything is heated through

I sweetened it ever so slightly with 1 tablespoon of coconut sugar.

One more “tip,” the sauce completely blends in with the pasta so if you want it more “saucy,” use a little less pasta.